Premier League champions Manchester City have edged Europe’s biggest clubs to emerge as the club with the most valuable squads in the continent’s top five leagues.
In a new rich list made available by transfermarkt.com and obtained by Soccernet.ng, Pep Guardiola’s team, worth £1.14bn, claimed top spot ahead of 2018 Champions League winners Real Madrid (£1.07bn), with La Liga champions Barcelona (£1.03bn) further behind in third place.
European champions Liverpool (with a squad valued at £959.18mn) sit pretty in fourth while French champions PSG edged Champions League finalist Tottenham to the top 5 thanks largely to the deadline day signing of Argentine striker Mauro Icardi. 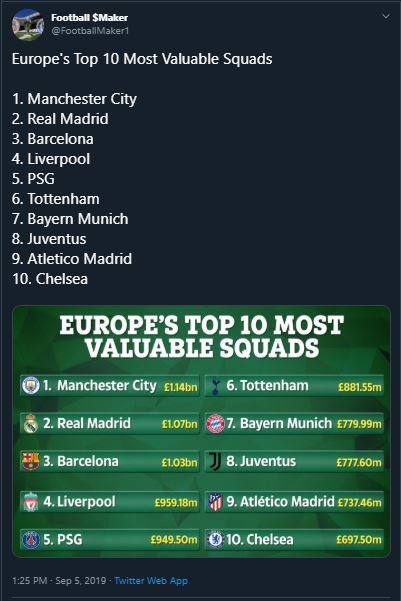 Mauricio Pochettino’s side is estimated to be worth a staggering total squad value of £881.55million.
The French champions PSG bought Icardi in on a season-long-loan with a £64m option to buy and their playing staff are now worth a cool £949.5m, according to Transfermarkt.com.
And having signed the Argentine bad boy, PSG now boast the most expensive front three in football history.
Chelsea make up the three English teams in the top ten, with the London giants, handicapped by a two window transfer ban, sneaking in at tenth with a squad value of £697.5m.
The Blues squad may have dropped in value after having to rely on youth but they still sit above Premier League rivals Manchester United and Arsenal who do not make the top ten and sit 11th and 13th respectively.
Barcelona Europe’s biggest clubs Liverpool Manchester City PSG Real Madrid Tottenham