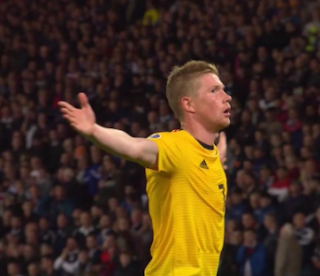 After a stunning start to the Premier League season with Manchester City, Kevin De Bruyne continued in the same way on the international stage last night as he ran the show as Belgium blitzed Scotland 4-0 at Hampden Park last night.

The 28-year old delivered a hat-trick of assists inside just 23 minutes and then capped off a masterful playmaking display with a trademark curling finish into the far corner in the second half.

The first set-up for a teammate was a blistering counter-attack nine minutes in that finished with De Bruyne laying on a perfect pass for Romelu Lukaku to open the scoring with his 30th goal in his last 32 games for the national team.

'KDB', captain for the game, then proved why he's the best crosser in the business with a pinpoint ping into the box for Thomas Vermaelen to add a second in the 24th minute, before he assisted a second centre-back in Toby Alderweireld when the Spurs man headed home his corner in the 32nd minute.

He wasn't done there though, inflicting more misery on the Scots with nine minutes remaining as he turned scorer rather than provider with an outstanding finish.

His whole performance was next level and makes for a very good watch in this two minute compilation clip doing the rounds.

Celtic's Ryan Christie, who saw De Bruyne's brilliance up close and personal - told Daily Record after the game would watch the former Chelsea man's highlights from the game and look to learn from him.

Roberto Martinez, meanwhile, waxed lyrical about his talisman for his display and called him "the best playmaker in the world".

"I think he's in the best moment of his career. This campaign has started with a freshness and real driven feeling of playing at his best and when he does that he's as good as it gets. There's no other midfield player that can create space, a playmaker that can execute the passes that he does."