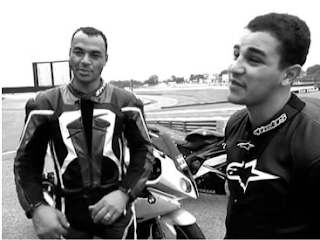 Danilo Feliciano de Moraes, the son of Brazil legend Cafu, has sadly died of a heart attack whilst playing football at their family home in Barueri, Sao Paolo.

The 30-year-old, who was the eldest of three children, was playing with friends in the area when he complained of chest pains.

He was rushed to a local hospital but doctors could not save him.

Local reports suggest de Moraes had complained of feeling unwell before taking part the game on Wednesday, where he played ten minutes before coming off.

Players, clubs and fans have since paid tribute to Danilo Feliciano de Moraes.

"The club sympathises and wishes the tricolor idol, family and friends a lot of strength."

Another one of the Brazilian's former sides, Palmeiras, expressed their condolences: "The Palmeiras Sports Society mourns the death of Danilo, son of Cafu, and expresses condolences to the world champion and his family."

While Real Madrid released a statement that reads: "El Real Madrid C. F. expresses its deep regret at the passing of Danilo, the son of Brazilian football legend @officialcafu.

"The club wishes to convey its condolences to Cafú and his family and shares in his grief in these difficult moments." 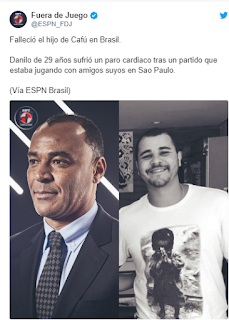 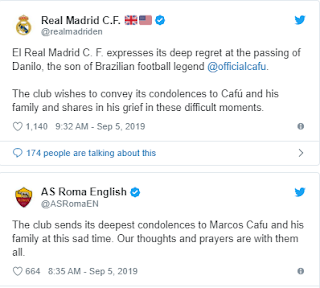