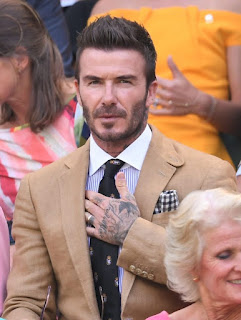 Former England and Manchester United captain David Beckham has hinted he would consider taking up England manager job if offered the chance in future but won’t grab it now at the expense of his former teammate impressive Gareth Southgate.
Beckham, a free-kick specialist during his playing days, retired as a professional footballer in 2013 after representing England 115 times and captaining the Three Lions for four years.
He seems to have made a u-turn after earlier been noncommittal about taking to coaching after retirement as a player.
The 44 year old told GQ in a recent interview that some chieftains of English FA have complimented him as future England manager. But he is ready to wait for his time to come while he enjoys being a fan fan of Gareth Southgate and his current England squad.
“I think some people within the FA saw me possibly as a future England manager, just because maybe I had had a successful career being England captain,” Beckham opted to reveal more when GQ asked if he ever fancied coaching his former club Manchester United.
“If someone turned around to me and said, If the England job came up, would you take it?, I mean, of course I would think about it, because I’m a passionate Englishman and I’m passionate about our national side, butwould I be any good at it? Who knows?”
Beckham added: “It’s a dream job, but Gareth [South gate] is doing the most incredible job for us right now. He’s brought energy and excitement back into thegame and the fans – myself included – are enjoying that.”
David Beckham England English FA Gareth Southgate Manchester United Three Lions