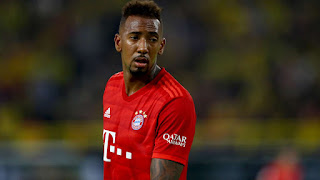 The 31-year-old was indicted in February but a court is still investigating whether to proceed with the charges
A prosecutor in the district court of Munich has filed charges of assault against Bayern Munich defender Jerome Boateng.
The charges claim that Boateng was violent against his former partner, with whom he had a relationship for a decade.
The prosecutor, Anne Leiding, confirmed to SID that an investigation into Boateng began in 2018, with charges brought forward in February 2019.
"The Munich prosecutor has had a case since autumn 2018 against Jerome Boateng because of dangerous bodily injury, and after extensive investigation on February 11, 2019 a charge was brought to the Munich District Court," Leiding said.
The prosecutor added that police are also investigating another incident that took place two weeks ago.
"Moreover, the police are currently investigating another case of suspected personal injury to the detriment of the same victims," Leiding said.
Though the charges were filed in February, the court is still in “intermediary proceedings” as further investigations are being conducted to determine whether a judge will admit the charges.
"It is incomprehensible to us why the court is waiting so long with a decision on the indictment," the prosecutor's office said.
Meanwhile the law firm representing Boateng released a statement refuting the charges.
"It is a private matter, which is basically based on unproven accusations of a third party,"
Boateng and his partner were together for 10 years and have two children.
Bayern Munich Defender February Jerome Boateng