Arsenal put the emphasis on youth in summer of change.

on September 03, 2019
Arsenal's summer overhaul concluded with Henrikh Mkhitaryan completing a season-long loan move to Roma on the final day of the European transfer window.
The Armenian became one of 25 players to leave the Emirates Stadium either on loan or permanently during the summer, and it is a move which sums up the club's new approach to squad-building.
By moving on the 30-year-old Mkhitaryan, Arsenal not only reduce their wage bill but also free up playing opportunities for young academy graduates such as Joe Willock and Reiss Nelson. 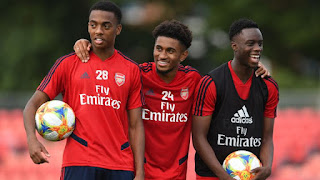 One obvious conclusion from Arsenal's summer is that they have placed youth over experience.
In Lichtsteiner, Koscielny, Mkhitaryan, Ospina and Monreal, they have sold or released five players over the age of 30. The 32-year-old David Luiz did arrive from Chelsea, but the only other players in the squad aged 30 or over are Pierre-Emerick Aubameyang, Ozil and Sokratis Papastathopoulos.
Otherwise, the squad has a youthful feel. With the exception of Luiz, their summer signings had an average age of 21. There is also a promising crop of academy graduates competing for a place. Willock and Nelson have already impressed this season, while Emile Smith Rowe and Bukayo Saka are waiting in line, too.
When Willock and Nelson started at Newcastle on the opening weekend of the new season, it was the first time since February 1998 when Arsenal had named two English teenagers in their starting line-up.
The change has been just as dramatic behind the scenes. Where once there was an all-powerful manager in Wenger, now there is a whole team in place to look after off-field matters, allowing head coach Emery to focus solely on what happens on the pitch and making Arsenal more efficient in the market.
Raul Sanllehi has overseen the summer business in his role as head of football, with help from chief executive Vinai Venkatesham as well as technical director Edu. The Brazilian was appointed in July following the departure of former head of recruitment Sven Mislintat earlier this year.
The hope now is that Arsenal have all the pieces in place to keep them moving in the right direction for the long-term. Their efforts to build the side up for the future have only just begun.
Arsenal Arsene Wenger David Ospina Koscielny Lichtsteiner Mesut Ozil Mkhitaryan Monreal Pierre-Emerick Aubameyang