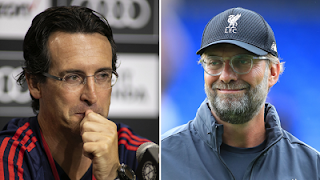 Arsenal manager Unai Emery has made a surprising claim that he doesn't "want to play against Liverpool ever."

The Gunners have won their opening two Premier League matches and face a tough test when they travel to Anfield on Saturday for their clash with Liverpool.

But Emery has hilariously suggested that he doesn't want to come up against the in-form Champions League holders.

"For us, we don't want to play against Liverpool ever," the 47-year-old Spaniard said.

"We'd prefer not to play against them.

"That is really our challenge, a good test. For the supporters, for all of us, going there with six points is good.

"Really our target is to reduce the distance to Liverpool, Manchester City, Tottenham and Chelsea.

"When we play against them it is a big challenge to show how we can be. [This] week is going to be a very good match.

"I think first is to be positive in our capacity and then work hard. I know my past is to work hard, the present and future is going to be the same.

"After we can win, we can lose. But above all is be positive and keep moving ahead."

Jurgen Klopp's men finished second in the Premier League last season and are currently top of the table alongside Arsenal.

Liverpool were able to capture the Champions League crown last season after they defeated Tottenham Hotspur in the final.

And Klopp's side lifted more silverware last week after they beat Chelsea on penalties in the Super Cup.

Arsenal held Liverpool to a 1-1 draw at home last season, but their visit to Anfield last December ended in a 5-1 thrashing at the hands of the Reds.
Arsenal Liverpool Manager Scariest' Premier League Team Unai Emery