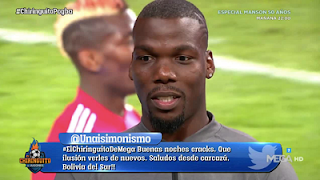 Mathias Pogba claims his brother wants to leave Manchester United and believes the midfielder could move before the Spanish transfer window slams shut.
The 26-year-old has previously expressed his desire to leave the Premier League side, most notably back in June when he publicly announced that it "could be a good time to move elsewhere."

But these comments from his older sibling have only cast further doubt on his future at Old Trafford.

"Zidane is one of the greats and I think that if the club give him what he wants, he won't have a problem." he said.

"But if they don't give it to him, he's going to have a hard time because what he wants is not going to happen, because right now it's a little late.

"My brother is missing and I think he needs another midfielder. Of course Florentino [Perez] can get him, nothing is impossible in life. I don't think he's worth 200 million, but now the football world is like that, Manchester are going to ask for a lot, but not 200.

"It's a delicate situation but the player has his personal goals, if you have to leave, well, that's it."

Mathias Pogba then went on to claim "anything can happen" ahead of the Spanish transfer window closing on September 2.

"If you can't stay and play where you are, you can stay and you're done." he told El Chiringuito.

"I can't assure you that he is going to stay at United. We know he wanted to move, but he's not to blame. He's waiting. He works hard and we'll see what happens.

"In football you never know. Until September 2 everything can happen. My brother's dream is to win the Champions League."

Pogba was then asked by a fan whether he could convince his brother to move to Los Blancos. "Friend, I'll have words with my brother but I can't do everything so you'll have to wait like the rest." he said.
brother CD Manchego El Chiringuito Manager Manchester United Mathias Pogba Old Trafford Real Madrid Shocking Interview Spanish Spanish TV show Zinedine Zidane