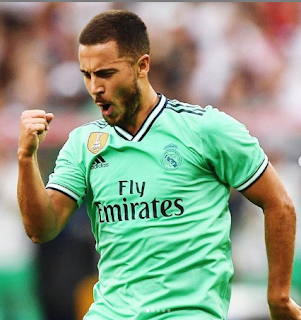 Eden Hazard has picked up an untimely hamstring injury, with the Belgian set to see his competitive debut for Real Madrid delayed.

The Blancos are set to open their 2019-20 La Liga campaign away at Celta Vigo on Saturday.

Hazard, fresh from a €100 million (£88m/$112m) transfer to Santiago Bernabeu from Chelsea, would have been hoping to figure prominently in that fixture.

He is, however, set to be restricted to a spectator role after suffering an unfortunate knock.

Real have confirmed that the 28-year-old is facing up to a spell on the sidelines.

A statement on the club’s official website read: “After the tests carried out after training today by the Real Madrid Medical Services, our player Eden Hazard has been diagnosed with a lesion in the anterior rectus of the left thigh.”
2019-20 La Liga away Belgian campaign Celta Vigo competitive debut Eden Hazard hamstring injury Real Madrid The Blancos