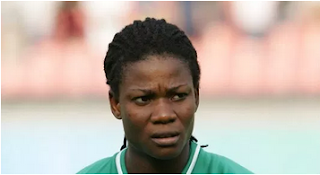 According to a statement released today Thursday August 22nd by the Nigeria Football Federation NFF, Chiejine died after a brief illness on Wednesday August 21st.

Until her death, she was playing for SSVSM-Kairat Almaty in the Kazakhstani Championship.

The midfielder captained the first Nigerian team to the then U19 Women’s World Cup in 2002. She enjoyed a brilliant career playing for the likes of FC Indiana in USA’s W-League, KMF Kuopio and PK-35 Vantaa in Finland and Zvezda Perm in Russia.

She became a fully capped international, being a part of the Nigerian squad to the 1999, 2003 and 2007 editions of the senior Women’s World Cup. She also played at the 2000 and 2008 Olympic Games in a glorious career that saw her score 15 goals in 61 games for Nigeria.