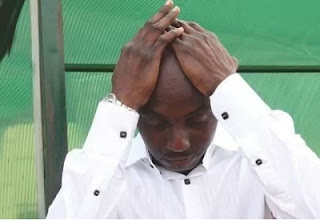 Fifa has banned former Nigeria coach Samson Siasia from all football activity for life after being found guilty of accepting to receive bribes in order to manipulate matches.
Siasia who led Nigeria U20 and Nigeria U23 teams to second-place finishes at the 2015 Fifa U20 World Cup and the 2008 Beijing Olympics was also fined CHF 50,000.

According to the world’s football ruling body, the 52-year-old breached the 2009 edition of the Fifa Code of Ethics after investigations began on February 11 this year.

“The adjudicatory chamber of the independent Ethics Committee has found Mr Samson Siasia, a former official of the Nigeria Football Federation, guilty of having accepted that he would receive bribes in relation to the manipulation of matches in violation of the Fifa Code of Ethics,” wrote Fifa in a statement.
ban bribe coach FIFA Fifa bans Samson Siasia for life football activity Life manipulate matches Nigeria Nigeria coach Samson Siasia