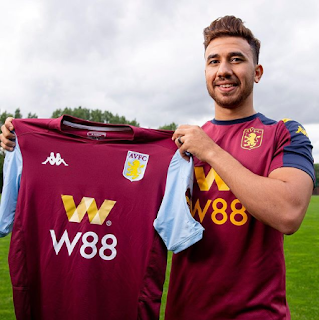 The 24-year-old, who made four appearances and scored one goal at this summer's Africa Cup of Nations, signs from Turkish club Kasimpasa.

He started his career with Egyptian side Al Ahly before moving to Anderlecht in 2015, joining Kasimpasa two years later.

"I've watched him a number of times. He's the type of wide player that we have been looking for who is direct, causes problems for the opposition in the final third and scores goals."

It means that Villa have now spent almost £100m on transfers this summer, while the club are also hoping to complete the £15m signing of midfielder Douglas Luiz from Manchester City.

Since winning promotion to the Premier League in May, Villa have signed defenders Ezri Konsa, 21, from Brentford for £12m; Bjorn Engels, 24, for £9m from Reims; Tyrone Mings, 26, from Bournemouth for £20m; Kortney Hause from Wolves for £3m and left-back Matt Targett from Southampton for £15m. Villa also spent £22m on forward Wesley from Club Brugge, £8m on winger Anwar El Ghazi from Lille and signed midfielder Jota from Birmingham in a swap deal.
Aston Villa Egypt International Egyptian Mahmoud Trezeguet sign Trezeguet WInger