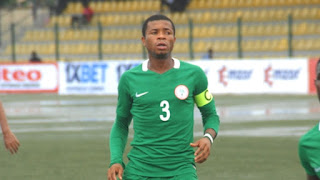 Israeli top-flight side Maccabi Haifa have secured the signing of Nigeria U20 captain Ikouwem Utin from NPFL outfit Enyimba in a four-year deal.

The left-back is one of the promising talents to emerge from the country in recent times and has established himself on the national scene.

Earlier this year, Utin led the Flying Eagles to a fourth-place finish at the U20 Africa Cup of Nations in Niger, and he is touted to shine at the 2019 Fifa U20 World Cup which kicks off on May 23.

He was also a member of the Eagles B side that finished second at the 2018 Africa Nation Champions in Morocco and made his international debut as a late substitute in Nigeria's win over Egypt in March.

At club level, the 19-year-old was regarded as one of the finest left-backs in the Nigeria Professional Football League. He was part of the Enyimba set-up that reached the semi-finals of the 2018 Caf Confederation Cup.

In 2018, he pipped FC Zurich striker Stephen Odey to the NFF Young Player of the Year award.

He is set to join his new club after fulfilling his duties for the Flying Eagles at the U20 World Cup in Poland.
Enyimba Ikouwem Utin Maccabi Haifa Move Nigeria U20 captain NPFL Seal Signing transfer